Spend over $125 and get 10% off! Automatically applied during checkout.

Pork stir fry with green pepper, or what we call “青椒肉丝” is a simple recipe, but it involves a Chinese restaurant’s secret. I am sure many of you have wondered why the meat in Chinese restaurants is so tender and succulent. I will reveal the secret and you will be able to make perfect stir fry from now on.

To Marinade the Pork

To Make the Sauce (碗芡)

Pork stir fry with green pepper, or what we call “青椒肉丝” is a simple recipe, but it involves a Chinese restaurant’s secret. I am sure a lot of you have wondered why the meat in Chinese restaurants is so tender and succulent. I will reveal the secret and you will be able to make perfect stir fry from now on.

To Marinade the Pork

To Make the Sauce (碗芡)

Slice the pork loin into thin slaps. Stack the slaps together and thinly julienne them. You can change to other meat such as chicken or beef. It doesn’t matter what you are using. As long as you know how to marinade it correctly, it will come out tender and soft.

Season it with 1/4 tsp of salt, some white pepper to taste, 1 tsp of dark soy sauce, 1 tbsp of Chinese cooking wine, one egg white (If you don’t know what to do with the leftover egg yolk, make general Tso's chicken), and 1 tbsp of cornstarch. Roughly mix to combine all the seasonings. Then continue to message the meat for 5 minutes. Last, add a big drizzle of oil and give it a rough mix. The oil prevents the meat from tangling, so it is easier to stir fry later. Alright, set it aside.

Using cornstarch and egg white in the marinade and then massaging the meat is a technique called velveting or “上浆” in Chinese. It creates a starchy layer, which wraps around the meat and protects the muscles from seizing up while cooking. This is why the stir fry meat in Chinese take-out restaurant are always so juicy and tender. I strongly suggest you give it a try. Trust me, you will be blown away by the result.

Peel a few cloves of garlic and slice them thinly. Thinly julienne some green chili pepper. If you don’t eat spicy food, it is completely fine to use bell pepper. 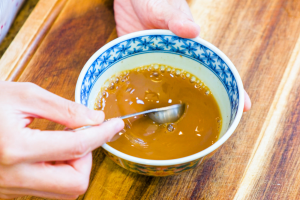 Turn the heat to high and heat the wok until smoking hot. Add some pork lard and stir the pork over high heat for a couple of minutes or until the meat changes color. Add 1/2 tbsp of tiam mian jiang (甜面酱) and mix well. Tian mian jian needs to be sauteed to activate the flavor; that is why I didn’t add it to the sauce. 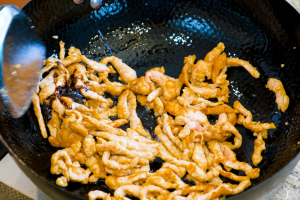 Switch the heat to medium. Toss in the garlic and some green pepper. Keep mixing until the pepper is slightly welted. This depends on your preference. If you want the pepper to be soft, you can cook it a little longer. I actually prefer it to be crunchy so I didn’t cook it for too long. Pour in the sauce and stir well. How quick and easy was that? 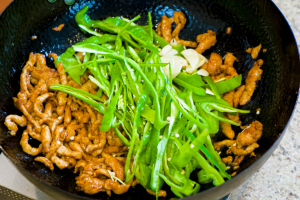 This dish is known as “rice killer recipe 米饭杀手” because it is really flavorful. Whenever it is on the dinner table, it makes you want to eat more rice. The velveting technique is amazing. Seriously, you won’t believe how tender the pork is. The texture is soft and melt in your mouth. I literally can’t stop eating.

Why can’t I print your recipe? I can use printer with other jobs.

Hi Mandy.
I love all you’re recipes. They’re so delicious and you explain every step so well that even I can make them.🤣
Just thought I should mention that in step 1 of your written directions you forgot to mention adding the cornstarch.
Sorry to point it out to you but I’m sure it’s important in the velveting process.
James